This #Bananamazing sponsored post has been compensated by #CollectiveBias, Inc. and its advertiser. As always, these snackably good opinions are mine alone. 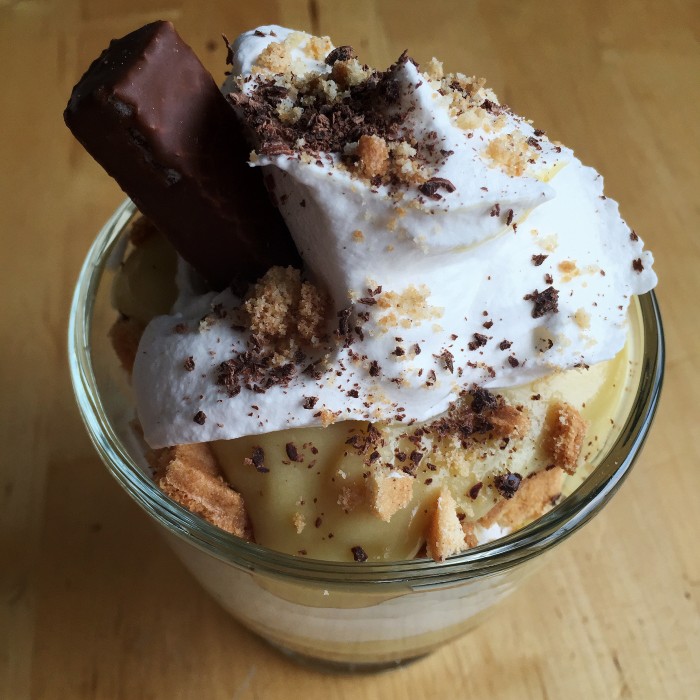 Ready for an idea with a true a-peel? Okay…puntastic wording aside. Growing up, a favorite on our table was Gran’s banana cream trifle. And today, I get to take this simple recipe one step further to show you how we love using Bananamilk to make it!

Did you even know that Bananamilk was a thing? I didn’t…at least not until my kids enthusiastically started pointing to the Sir Bananas™ in the dairy aisle at Walmart. And people…this milk is bananas. Like literally, the second nutritional ingredient listed is pureed banana. 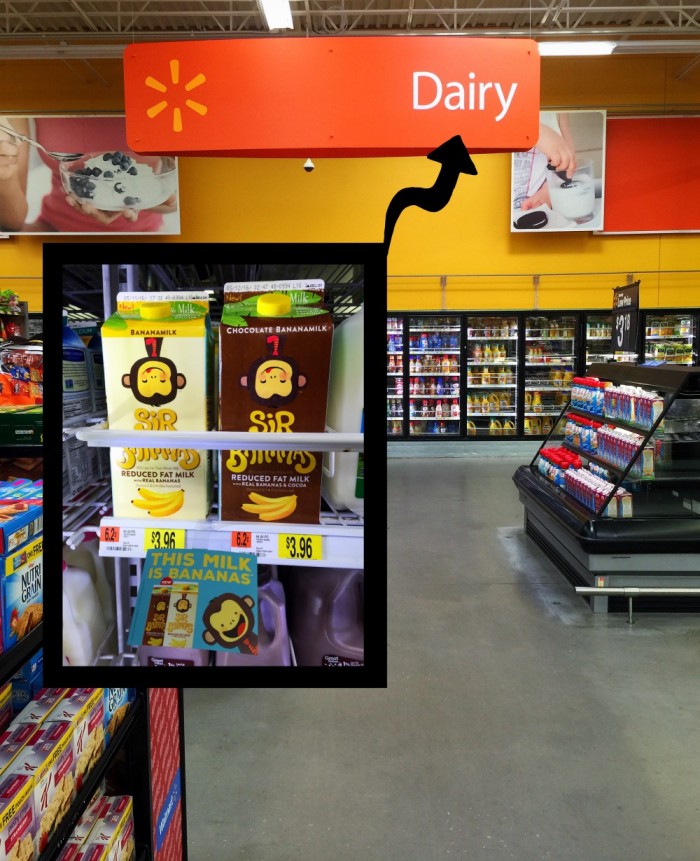 Stay with me here. Because it really is hard to envision until you’ve had it or drink banana-based smoothies. Then it’s like Sir Bananas™ wanted to help kids even more. And went on to surpass every standard nutritional argument I normally come up with:

And its website even makes a point to mention that it covers 8 essential nutrients per serving. Such as 7g of Protein as well as being a good source of calcium and potassium. Deliciously smooth, this thick and hearty consistency reminds me of drinking (said) banana based smoothies. So where I actually got excited was where I could replace milk in recipes with Sir Bananas™. 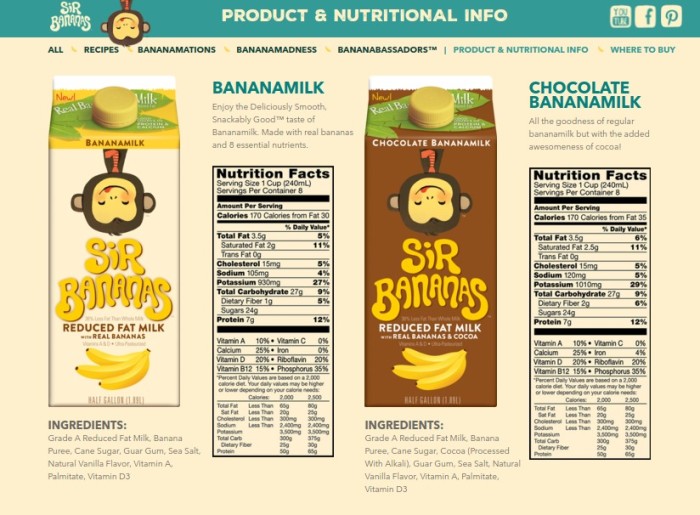 So it was swapped in our blueberry muffins. I’ve used it as creamer in my coffee. I promise you there will be peanut butter powder and Bananamilk smoothies in our future. And of course…Gran’s Banana Trifle was about to be retrofitted with this 2% wonder milk. 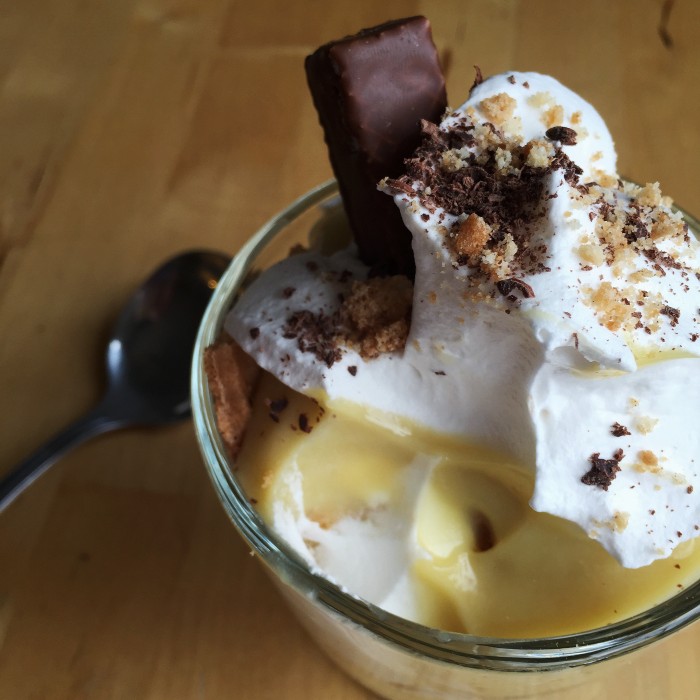 As a rule, I like to keep certain basics in my pantry. One of them being vanilla pudding. Normally a person would use banana cream pudding for a fittingly named Banana Cream Trifle. But where’s the fun and resourcefulness in that?

Plus now, using Sir Bananas™ Bananamilk, I’m able to whip this classic dish up without a special run to the store. Because there is also a little known and slightly conflicting issue with my love of all things banana cream. I’m really really picky about things not tasting like overripe banana. 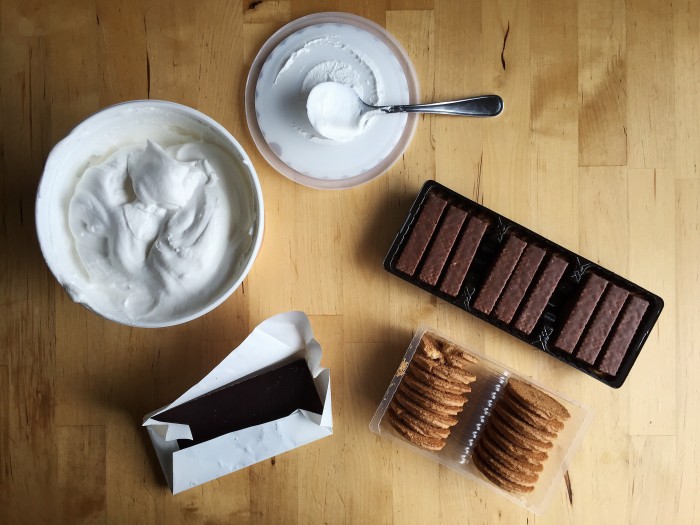 Mostly this stems from the browning of cut bananas folded into the banana cream trifle. So for us, I leave my trifle deconstructed, skip the sliced bananas, and use mini-trifle dishes to serve. I also found a shortbread cookie at Walmart that uses banana flour that I use instead of traditional vanilla cookies. As well as adorning each with a hazelnut or chocolate filled wafer and chocolate shavings. 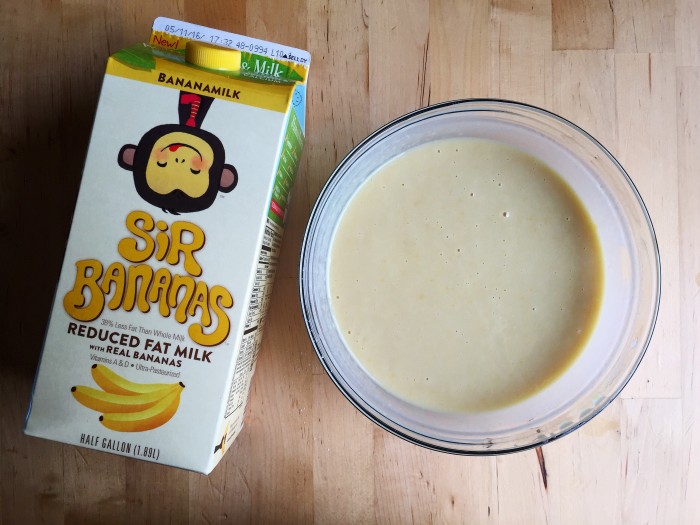 To start, I followed the instant pudding recipe and mixed 3 cups Sir Bananas™ to 1 package of Vanilla pudding. This will actually set in 5 minutes, but I like to chill it before serving. And I’ve found it really brings in that fresh banana flavor that sliced bananas would. 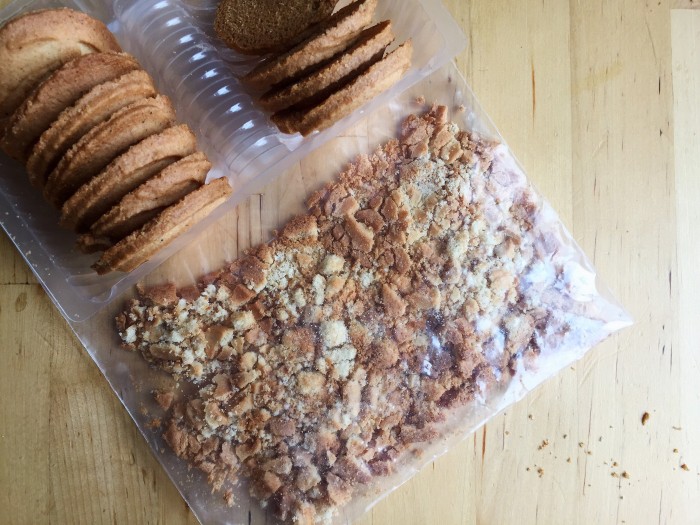 When ready, I toss 4 shortbread cookies into a sandwich bag and to crush to a crumbled consistency. An additional 4 are simply broken up to bite-sized pieces. And now…we get to layer! 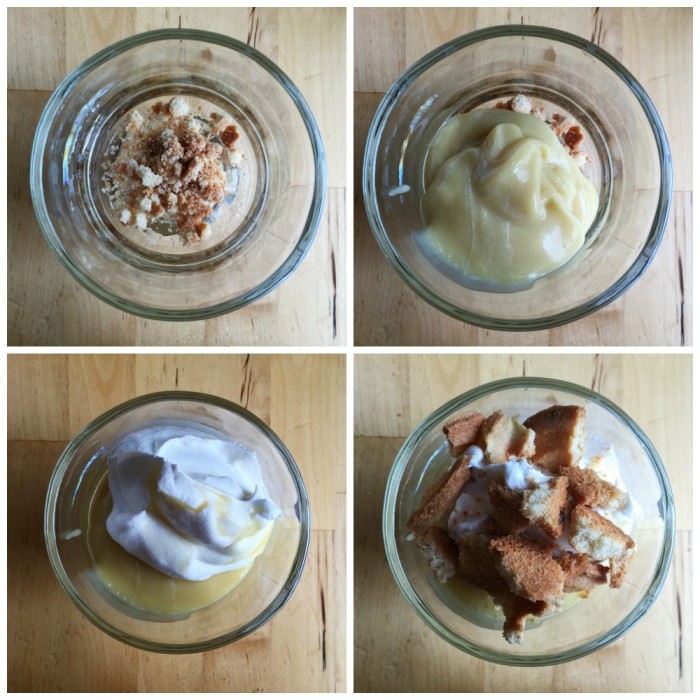 I sprinkle a little crumbled cookie in the bottom of my mini-trifle dish. And then proceed to layer in the Bananamilk Vanilla pudding, whipped cream, and broken shortbread cookie. 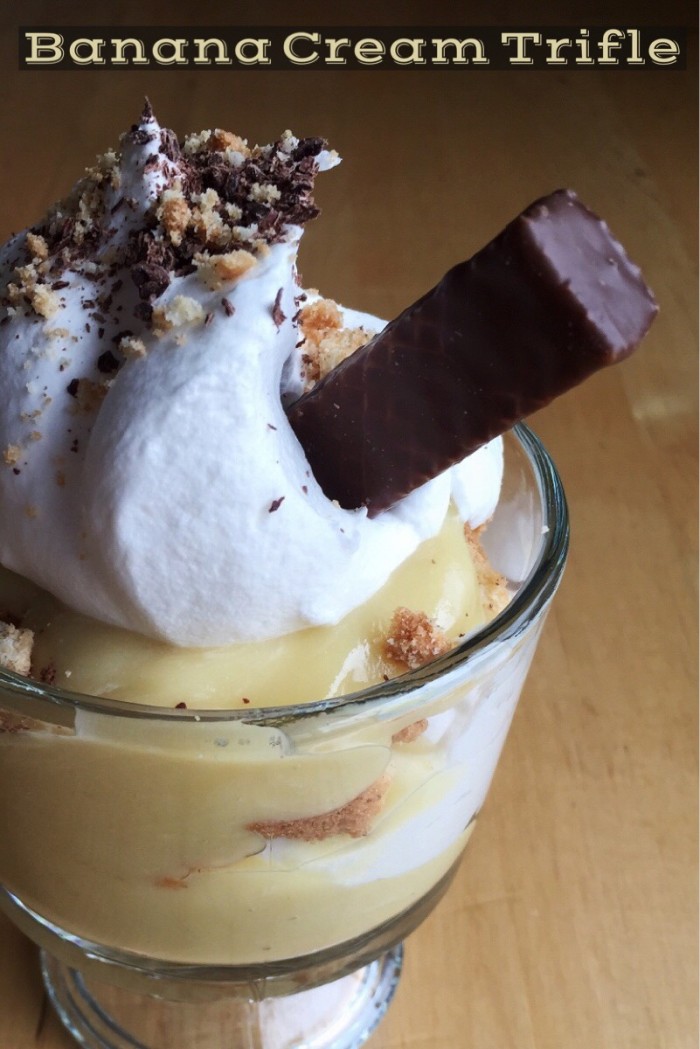 This is then topped with more whipped cream and chocolate shavings from semi-sweet baking chocolate bar. I press in a banana slice and will finish with my chocolate wafer cookie. I think Gran would be proud.

Overall what I like about replacing milk with Sir Bananas™ Bananamilk here, is being able to keep a fresh banana flavor while still enjoying this classic treat! And being able to use the vanilla pudding instead of a fake tasting banana variety really takes this dessert up a notch. 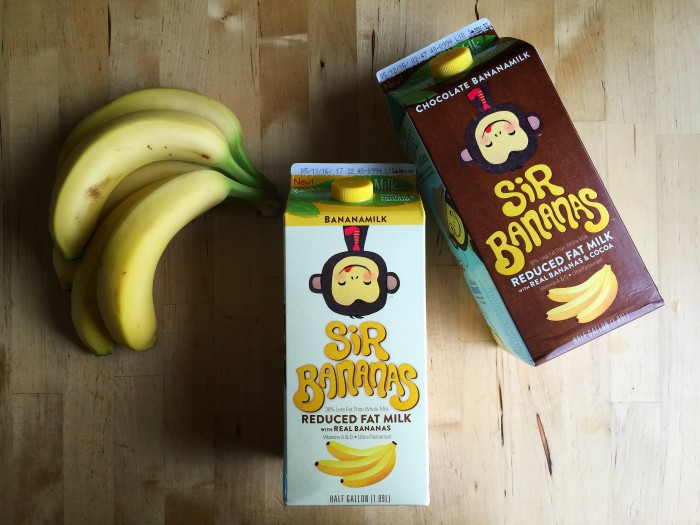 Now the only thing to do is start recipe testing with the chocolate Bananamilk! What say you? Would you give this fun and delicious treat a try? Let me know below what you’d love to sip or swap it with!