Join my newsletter list to be the first to hear our latest news! Learn More
Home | Lifestyle | An AmeriCorp Memory 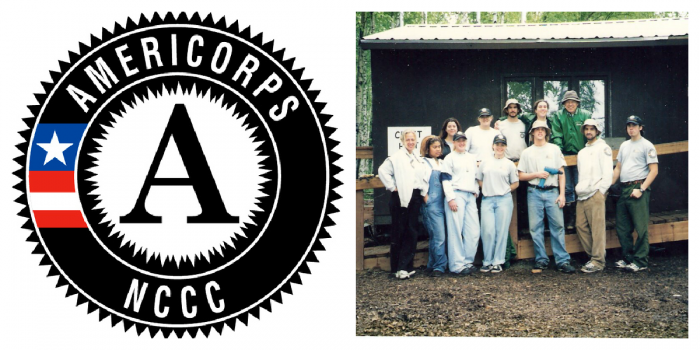 You know, as you age, a woman’s life becomes less and less her own. Getting married and creating a home. Bustling to a full-time job for a paycheck and healthcare for 40+ hours a week. Becoming a Momma on top of all that? Well, often times I look in a mirror and think, “Where did I go”?

And I say that in the best possible way. People simply change. And some change is brilliantly grand to experience. While other experiences leave pictures and memories of a girl who doesn’t quite resemble me anymore. We still have the same traveling heart and feisty ambition. But I would hardly agree with her on thinking she was fat or ever had a bad hair day at this point.

At 19, {and a year before this picture} I walked more then 2 miles through cornfields to a buy a one-way ticket to Montana. I walked because I didn’t have a car. And when I got to our town travel agency; I didn’t even know more to tell the woman then the town I was going to. I think I left with $2 to my name and not a clue to how I was going to even get to the train station. To say that my parents were less then pleased is an understatement.

I’d accepted a job as Camp Counselor and figured I’d just save enough for a ticket back when the time came. {Looking back, I’m still not sure if I was just naive or stupid at that point.} Regardless, I had applied to AmeriCorp *NCCC {National Civilian Community Corp} months before I’d left. And I took my entrance interview inside a sink cupboard of a concrete floored recreation room. This in an attempt to hear a dude speaking the only accent {over 40 screaming girls} I can’t ever wrap my brain around.

And the thing is, if I hadn’t blindly followed my dreams to head out there; I don’t think I’d have passed my entrance interview. Situations there, for that particular job, gave me the exact experience for the answers to his questions. I don’t even remember how it was that the obtained the phone number to the remote camp we were at that month. I hung up thinking I had failed. A month later, I bought the last train ticket home two days prior to leaving.

My arrival back home and my acceptance to AmeriCorp were pretty much simultaneous. And within 14 days of receiving my relocation directions I was on a plane to San Deigo, CA. I spent the next year traveling with an amazing group of people up and down the west coast from California to Alaska. To which our summer in Alaska, is where this picture was taken. We were helping the YMCA restore a campground. To which you can find me, right in the middle, fourth in from either right or left.

Together we completed more than 1700 hours of community service for a variety of both well known and smaller non-profit organizations. Upon completion, I took my American Red Cross Disaster Relief training and volunteered with two national disasters in Texas and Florida the fall of 1998. I ventured in to college after that and became a Lifeguard. I ended up doing a lot of good, all because I firmly believed in buying a one-way ticket.

That is a lot to see when you look at a picture. {They don’t say they’re worth a 1000 words for nothing.} My story, thankfully, goes on from there. One day I will have the time again to donate more then money. And hopefully have more pictures to share of other great adventures. Until then, I’m reconciling with this new woman in the mirror. She’s got her work cut out for her between preschool prissiness and teething terrors.

Thankfully, the coffee she learned to love in AmeriCorp still fuels her today while she rides this crazy road of Motherhood. At least red cups and green straws always look the same right? How about you? How well do you identify with your past?